Has Berlin got a Green light to get tough on…

Joe Biden has nominated Jay Powell to serve a second term as chair of the Federal Reserve, opting for continuity at a delicate moment for the US economy as it grapples with persistently high inflation and a patchy labour market recovery.

Lael Brainard, considered Powell’s fiercest competitor for the top job, was tapped for the role of vice-chair, a position currently held by Richard Clarida.

Biden said Powell and Brainard had helped “steer us through the worst downturn in modern American history and put us on the path to recovery”.

He added: “I’m confident that Chair Powell and Dr Brainard’s focus on keeping inflation low, prices stable, and delivering full employment will make our economy stronger than ever before.

“Together, they also share my deep belief that urgent action is needed to address the economic risks posed by climate change and stay ahead of emerging risks in our financial system.”

Biden did not appoint anyone for the handful of vacant spots on the Fed board, including vice-chair for supervision, which is responsible for banking regulation. “The president intends to make those appointments beginning in early December, and is committed to improving the diversity in the board’s composition,” the White House said.

The decision ends months of speculation about the Biden administration’s appetite to reshape the Fed at a time when the central bank is actively debating how to fine-tune monetary policy in the face of supply-related disruptions and mounting inflationary pressures.

This month the Fed began winding down its monthly $120bn asset purchase programme, with an intention to end the stimulus altogether next summer.

But recent inflation data, which showed US consumer price growth jumping at the fastest pace in roughly three decades last month, has raised the prospect that the Fed will have to discard its patient approach to monetary policy by accelerating the “taper” of the bond-buying programme before swiftly raising interest rates multiple times next year.

Powell, 68, was elevated to Fed chair by Donald Trump in 2017 after serving as a governor from 2012 and once worked as a top Treasury official under George HW Bush. He was seen as the least controversial choice for Biden, particularly as Powell’s broad bipartisan support is likely to ease the passage of his confirmation process through the Senate.

Powell’s backers also made the case that at a time of such pronounced economic uncertainty, a leadership change could generate unnecessary market volatility.

Having spearheaded the central bank’s forceful response to the pandemic, Powell won plaudits for preventing more extreme market panic and steering the US economy through one of the worst contractions in history.

In sticking with Powell, a Republican, Biden disregarded progressives’ criticism of the incumbent’s record on regulation, which resulted in what they argued was a dilution of post-financial crisis rules for the biggest financial institutions.

Elizabeth Warren, the leftwing Democratic senator from Massachusetts, went so far as to call Powell a “dangerous man” in September.

Biden and his team made the decision after speaking to both progressive and moderate Democrats on Capitol Hill, including meeting with Warren at the White House, according to a person familiar with the matter. The person said Biden spoke about his decision to both Powell and Brainard on Friday. 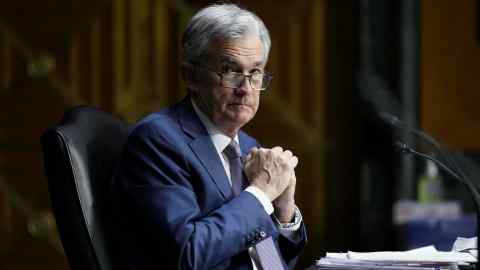 Brainard opposed easing capital and liquidity requirements for US banks during Powell’s tenure, as well as modifications to Volcker rule guidelines on proprietary trading.

Biden’s picks will need to be confirmed by the Senate. Early comments from lawmakers suggested that Republicans would largely back Powell’s renomination.

Sherrod Brown, the Democratic senator who chairs the Senate banking committee, which will oversee confirmation hearings for Powell and Brainard, said on Monday that he “looked forward” to working with Powell, and praised Brainard, saying she had “spent her life fighting for a stronger, fairer economy”.

Pat Toomey, Brown’s Republican counterpart on the banking committee, said he would support Powell’s confirmation, but was less firm in his support for Brainard. The Republican said while he had “concerns about regulatory policies that Governor Brainard would support”, he “looked forward to meeting with her to discuss these and other matters”.

Toomey’s comments were echoed by Kevin Cramer, another Republican on the banking committee, who said he also had “concerns” about Brainard’s positions but “looked forward” to meeting with her.

Biden’s pick adheres to the rarely broken tradition of reappointing an existing Fed chair to the job during a president’s first term in office — a nod to policymaking continuity and the independence of the central bank.

Barack Obama reappointed Ben Bernanke as Fed chair in 2009, while Bill Clinton did the same with Alan Greenspan in 1996. But Trump broke the mould four years ago when he picked Powell rather than give Janet Yellen a second term.

Has Berlin got a Green light to get tough on Beijing?

South Korean inflation races to fastest pace in a decade

Cardano (ADA) hits milestone of 20 million transactions, but when are dApps…

Grayscale writes a letter to the SEC, accuses the regulator of violating the law

Has Berlin got a Green light to get tough on…

Dec 2, 2021
Prev Next 1 of 1,963
Subscribe to our newsletter
Sign up here to get the latest news and updates delivered directly to your inbox.
You can unsubscribe at any time